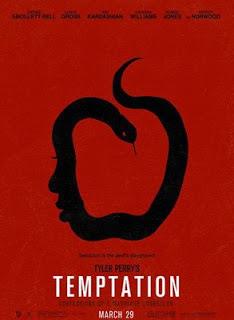 This is not a movie review. If you want accurate and critical reviews of this movie, see Ebony Utley’s brilliant post here or this review which gave the movie -0 stars. (Negative zero. In the words of Ralph Wiggum, that is un-possible except in the mind of this reviewer.)

You can also check out this great BuzzFeed article and HuffPost article on the movie’s odd morality play ending.

Color me a shade of not happy. My mother guilted coerced me into seeing the newest Tyler Perry production/travesty, Temptation: Confessions of A Marriage Counselor.Le duplicate sigh. I suffered through the movie with Twitter, a bag of kettle corn snagged from the farmer’s market, and the knowledge that whatever I write would be better than this. There were plenty of comical things I could share about the movie. For example, in the first scene where the marriage counselor starts telling the story of Judith to her patient, I rolled my eyes hard and loudly. No counselor tells personal stories in the room. If they do, they aren’t counseling. They are dishing. Also, this story lasted two hours. Who is paying for this session? I know Blue Cross Blue Shield would not.

(My other examples would include Vanessa Williams’ French accent that would make Pepe Le Pew shiver in delight and Lance Gross snapping a pencil in a “fit of rage.” That’s right: a pencil.)

Irresponsible film making and haphazard deployment of plot and characterization. I can deal with. The plot holes that forced me to suspend my disbelief entirely were horrible, large and obvious. But I can get past that. It’s Tyler Perry after all.

But I digress. That wasn’t the worst part of the movie.

The damn scene on the plane where the antagonist, billionaire Harley, pressures therapist Judith into sex. He pushes her legs apart and forces her to kiss him. Against her interests and ignoring her pleas of no.
Carolyn Edgar who wrote more elegantly about Tyler Perry than I ever will had the same problems with that scene:

Perry could have easily made Judith’s consent obvious. A breathless “Yes!” wouldn’t have completely removed the “ick” factor, but would have made Judith’s desires clear. Instead, Perry inexplicably chooses to leave the audience in suspense — briefly — as to whether or not an actual rape occurred, all while promoting the dangerous idea that a woman’s “No” is not really “No,” but merely part of the game of seduction. This scene puts Perry in such fine company as men’s rights advocates who argue that date/acquaintance rape is simply buyer’s remorse, and men who argue — as one man did on Twitter last week — that a man has to push to make sure a woman’s “No” is really “No.”

In Tyler Perry’s world, no means yes. Consent does not need to be given. After all you know you want him. You placed yourself in this position. In other words, you asked for it, you harlot. You tempted yourself, and you deserve the repercussions (which means you get pushed into duty sex, get HIV for having sex outside the marital bed, and end up shuffling along a sidewalk alone and going to church with your mother when you get old.)

That scene in the movie eventually turned into a torrent of passion. It reminded me of the bodice rippers of 1970s romance novels, and as a romance writer, I know that the majority of serious writers don’t and won’t write in that way. It reminded me that people–both men and women–see resistance as futile foreplay.

Temptation reminded me that the art we create can hit harder and stay with people longer than anything else; artists have a great task before them. As an artist, I respect that, and I also respect my craft enough to think about the circuit of culture and how these images and words might be received, regurgitated, and resisted. It reminded me that we can not depend on Tyler Perry to be responsible for the images of black women. It reminded me that we have more work to do and that April is Sexual Assault Awareness Month.

In light of this movie, the Rick Ross rape lyrics, Steubenville and people stating thatDrunk women are fair game, and the vicious Zerlina Maxwell trolling after she stated that men can stop rape, I am testy about all these things. I’m a bit on edge since these things have tumbled into the blogosphere, social networks and television channels. I’ve been a bundle of fragile nerves.

When I see these things, I start thinking about what happened on spring day a few weeks after Easter when I lived in Maryland.In my own apartment on Cherry Hill Road. After a brunch date and with a guy I knew. As the sunlight streamed through the open windows and as my date forced me to do something I didn’t want to do. I was cajoled. Asked politely. Seduced with kisses similar to Judith. I resisted. I kissed back between murmurs to quit. But when I asked him to stop and told him we were going to fast, he got rough. Twisting my arm. Pinning me down. Pressing into me as I resisted and pushed back. Telling me that I wanted to do this.Eventually I consented because I felt that I didn’t have an option. I consented barely, belligerently. My yes came after a string of “no” and a chorus of “stop.” I didn’t give enthusiastic assent. I gave hesitant consent that came after I couldn’t stop the probing hands and vice-like grips. My reluctant yes was the easiest way to get this over with and him out of my house.
Consent vs. Assent
That awkward, tense scene on the plane made me think about assent and consent, two words that I know through my IRB process. Both involve agreement, and both are used frequently to mean approval. Yet, the subtle differences shading the two words gets lost in the exchange and usage. Assent is the official expression of approval, the official sanction of agreement. Assent is explicit. Consent is implied permission of approval, for something to be done.

As one wordsmith wrote:

Think: “level of enthusiasm.” Assent has a higher degree of enthusiasm, whereas consent often comes after some reluctance.

That scene that had me confused, perplexed, and angry reminded me that begrudging consent and enthusiastic, affirmative assent are two different things; you should want the latter, not the former.

I am an oil-and-water combination of humor, ambition, laziness, insecurity, certainty, procrastination, and drive. I am an aspiring romance novelist who writes by the seat of her pants. Waging and sometimes winning a daily battle with procrastination, plots, characters, and the day job. View more posts