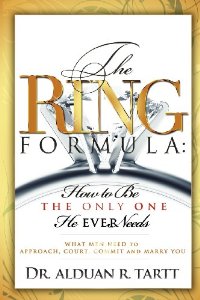 It’s time for my latest book report. (My bad: I should have published it earlier, and I thought I did. Nope. It was languishing in my draft files.) This week’s report is on The Ring Formula.

I’m not a fan of black men engaging in mansplaining. I am not a fan of most black men’s relationship advice because it echoes the same misogynistic tripe I can hear in the barbershop or in a Lil Wayne song. Still I am open to listening to men who are coming with good intentions, and Dr. Tartt came with good intentions.
Let me be honest: I know Dr. Tartt. Dr. Tartt is a real doctor. He’s cool people. He’s been a featured guest on Love Addiction, a TVOne show that I couldn’t get enough of, and he offered good advice on the show. I met him at a friend’s brunch where we attempted to get into the male mind. (Well, the other women did. I was more interested in getting into the shrimp-and-grits platter and biscuit box the waiter placed in front of me.) I did buy his book that day, and I let it sit on my shelf for a long time.
Now I know why. The title bothered me a lot. The assumption is that every woman wants a ring, and that’s not the case. But that’s a common assumption for most relationship books. Once I got past that, I did see some things that were valuable and other things that were the same claptrap I can get from trolling the Twitter feeds of some “relationship experts.” (I’m looking at you Keith Sweat and Tyrese.) See this blogger’s post for some explanation on the bad side of this advice.
The biggest thing I got from the book is that (some) men really are into this idea of hunter-prey. They like the chase. They relish in the thrill of it like pigs in filth. (Sorry, that was the best I could come up with this late at night). The hunter and prey analogy leaves a lot to be desired, especially considering that in the animal kingdom, a lot of female animals do the hunting. But it’s still interesting that (some) men are tangled up in that ideology.
The biggest disappointment is the chapter detailing that “men marry friends, not freaks.” Sigh. The madonna-whore dichotomy again. You have to be a lady in the streets and a lady in the bed. The implication that women who have sex early in the relationship is the result of some deep-seated psychological issues (probably going back to their fathers) is troubling and rests on some sexist observations. I believe in waiting for the appropriate time, not a mandated time frame as Steve Harvey and Patty Stanger suggest.
Sidebar: Alledgedly, the Millionaire Matchmaker found her new boyfriend on Plenty of Fish. If that’s true, I will eat my weight in Magnum ice cream bars.
The biggest laugh came from the chapter on being able to cook. When anyone tells me that I need to know how to cook to get a guy, I laugh because they have obviously not met some of my aunts who have hooked several husbands without knowing how to boil an egg. But it’s all in how you define cooking. I know how to follow directions, and I know enough not to kill someone (I hope).
Like with all advice, you take it with a grain of salt. Use what you can. Use what makes sense based on your situation. Discard the rest. That’s easier said than done, but I know that from this book, I can use chapter 2 and 5.

I am an oil-and-water combination of humor, ambition, laziness, insecurity, certainty, procrastination, and drive. I am an aspiring romance novelist who writes by the seat of her pants. Waging and sometimes winning a daily battle with procrastination, plots, characters, and the day job. View more posts